In 1988 the fire company formed a committee to investigate options on replacing the 1969 International tanker.  The committee once again looked to Pierce Manufacturing and placed the order in 1989 for the tanker.  The new Tanker was delivered in March of 1990 and boasted a 2500 gallon tank and 1000gpm pump.  The truck performed flawlessly throughout its time with the company; not only fighting fires, but filling many, many, many pools and winning many 1st place awards for Best Appearing and Equipped Tanker at many different events.  In the Early 2000's the fire company adopted a 15 year replacement plan on apparatus, it was decided this would start in 2005 and a new Pierce Tanker was ordered in 2004 to be delivered in 2005.  The Shackleville Volunteer Fire Company near Greenville, AL. purchased the truck and picked it up in September 2005, once the new truck was delivered.

In 2018, we spoke with the Chief Darrin Springer of the Shackleville Fire Company and asked how the tanker had served them for the past 13 years.  He said “Since putting her in service we have agreed to four first out in County auto aid agreements for structure fires and two agreements with depts in a neighboring County for aid on request. This engine's capabilities has taken a department with the smallest primary coverage area (25sq miles) to basically covering 1/4 of the County (700plus sq miles) for auto aid. We now have among the highest call volume for a volunteer dept. In the County. She has the largest water capacity of our mutual aid depts.” 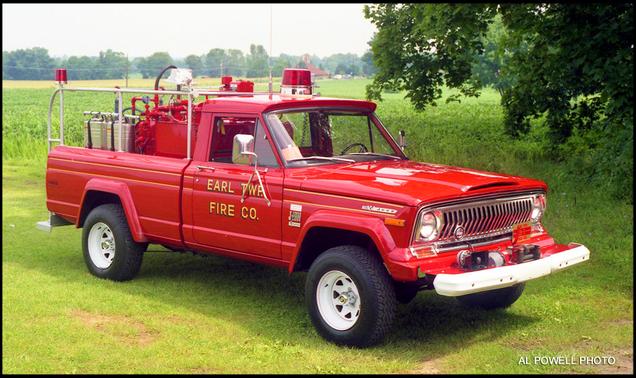 There are not any known photos of the previous tankers.  If you happen to be reading this and also happen to have any photos of the following, please contact us.  The first tanker owned by the fire company was a truck purchased from William R. Gift of Boyertown in 1959.  The actual year make and model of the truck are unknown to current members.  The second tanker owned was a 1948 Ford with a 1000 gallon tank which was purchased from the Oley Fire Company in 1967.  The third was a 1954 International 1650 gallon Tank Truck purchased, once again, from William R. Gift in Boyertown in 1968. 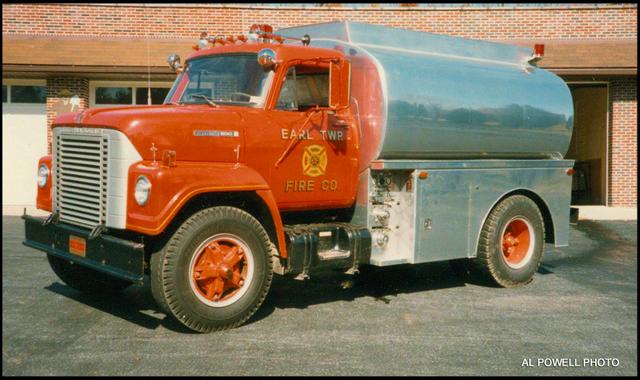 The 1955 Ford was the first truck purchased by the then newly formed fire company.  The chassis was sent to the Boyertown Auto Body Works to have a custom body built, 500gpm pump and 500 gallon water tank installed.  The pump was powered by a second V8 engine that was mounted mid-ship in the chassis.  The 55' was the only pumper the fire company owned until 1985 when the 1985 Pierce Pumper was delivered.  The 1955 was then used as a second out pumper until the company purchased the 1998 Pierce Dash.  The 55' was then put on loan to the Boyertown Museum of Historic Vehicles.  In 2009, the truck was officially donated to the Boyertown Museum of Historic Vehicles where it is periodically displayed.  In 2018, a volunteer mechanic of the museum said that they had recently had the pump motor running; it's estimated that the pump had not run since 1998. 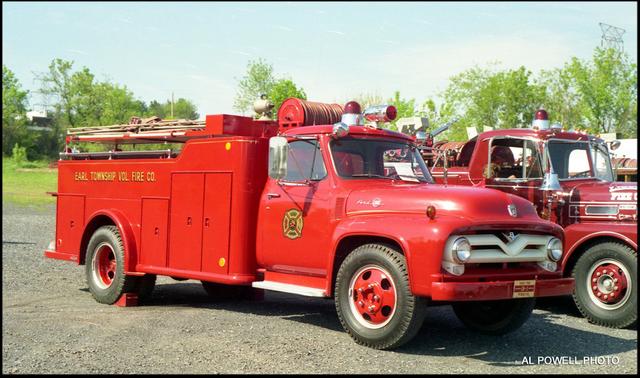 This 1923 American Lafrance pumper was donated to the fire company by the Keystone Steam Fire Eng. Co. of Boyertown.  The pumper was used by the company until 1955 when it was replaced by our 1955 Ford. 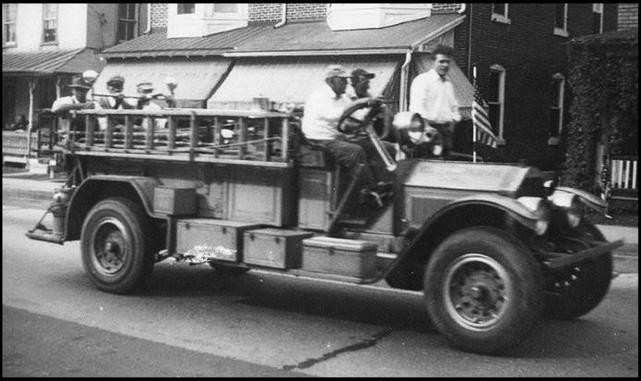 With the terrain and rural area of the township, the fire company discussed the addition of an engine with 4x4 capabilities as well as a Compressed Air Foam System (CAFS).  When used properly, Compressed Air Foam can smother a fire and use 2/3 less water than what would've been needed with water alone.  The fire company once again contracted with Pierce Manufacturing in late 2000 and in August of 2001, the new Engine is received.  The Engine is equipped with a 1250gpm pump, 750 gallons of water and 30 gallons of Class A foam.  The members of the company trained extensively in the use of the foam system and have applied it successfully many times.

As part of our 15 year apparatus replacement plan, the truck was due to be replaced in 2015 to then have both engines and the tanker spaced at an even 5 years apart.  The truck was sold to Jon's Mid America Fire Apparatus in 2015 which they in turn sold it to the Summit Fire and Medical Dept. just outside of Flagstaff AZ.

This 2008 Ford F350 was purchased in April of 2008 to serve as Brush 19-1.  The truck replaced our AMC Jeep which was purchased new by the fire company in 1973.  The truck was equipped with the skid unit out of the Jeep which had a 250gpm pump and 70 gallon water tank.  It was also outfitted with a multitude of brush firefighting tools.  The truck served as out second out apparatus for brush fires.  The truck was also used for various other functions including personnel transport, traffic control, medical assists and towing the ATV Trailer.  In the winter, the fire pump and tank were removed and the truck was used as a general purpose utility unit.  Unfortunately the truck was involved in an accident in March of 2019.  The driver of the truck was running errands and suffered a medical emergency and lost control of the vehicle.  The truck grazed a telephone pole and continued into the porch of a building in Birdsboro.   It crashed into some cement steps in front of the building as well which caused extensive damage to the front suspension and steering rack, among other things underneath the front of the truck.  Repair costs including body work, mechanical repairs and labor reached just over $20,000.  The company decided to not repair the vehicle and take the check for the repairs and put it towards a new truck.  The 2008 was then placed up for sale by sealed bid and sold in May of 2019 to a business in Boyertown.  A 2019 Ford F250 was purchased to replace this truck.

Engine 19, as it was designated, was a 2010 Pierce Arrow XT.  The truck replaced our 1998 Pierce Dash which was sold to the Phillies Fire Co. in Pottstown.  Engine 19's primary purpose is vehicle accidents and medical assist calls. The truck is equipped with a large amount of stabilization equipment, high angle rescue ropes and rigging, stokes basket, back board, A.E.D., medical bag and oxygen.

The Engine was also our third out truck for structure fires, the idea was that this truck would be a water supply engine to fill Tanker 19 while Engine 19-1 responds to the scene.  The truck had full firefighting capabilities in the event Engine 19-1 was out of service or on another call.  It's equipped with a 1250gpm pump and carries 750g of water along with 30g of class A foam.  The truck seats 7 with 5 air pack seats, carries a full compliment of firefighting hand tools.  The engine was listed For Sale in October of 2019.  In February of 2020 a sales agreement was signed with the West Liberty Fire Department of West Liberty, West Virginia.  West Liberty took delivery of the engine on March 14th, 2020. Attack 19, a 2019 Ford F550, replaced this engine. 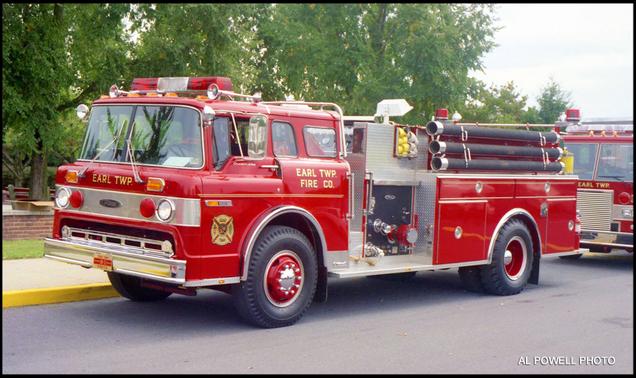 The fire company purchased it's first brush truck, this 1973 Jeep, for $2,050.00 from an AMC/Jeep dealer in Bechtelsville.  At the same time, an FMC slide in "Skid-Unit" is purchased and mounted on the truck.  In 1997 the truck was reconditioned and a new Skid-Unit with a 250gpm Pump and 70 gallon water tank was installed.  The FMC Skid-Unit was sold to the Mount Penn Fire Company.

The truck remained the only brush truck until 1995 when the Chevrolet was added to the fleet.  The 73' Jeep was then used as a second out piece, but it should be noted that even after the addition of a second truck, the Jeep saw plenty of service until 2008 when it was replaced by one of our two Ford F-350's.  The Jeep was sold via sealed bid to a gentleman from Coopersburg, PA in 2008.  It was sold with a little over 18,000 original miles. As of 2018, we last heard it may have been sold to someone in central NJ. 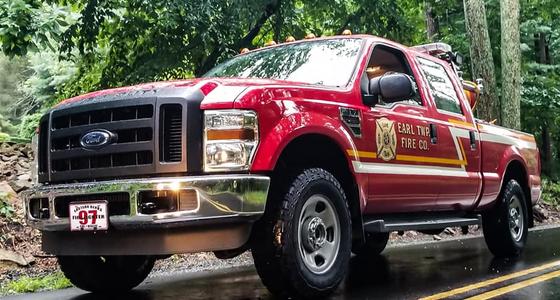 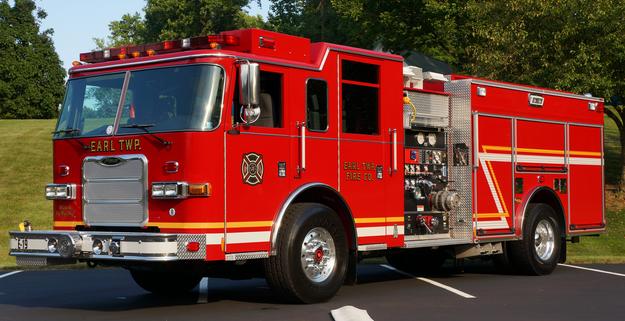 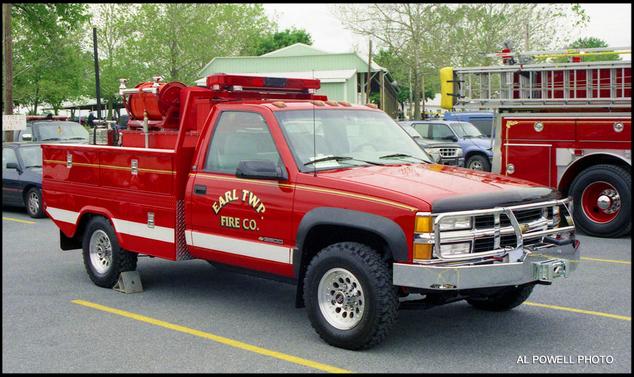 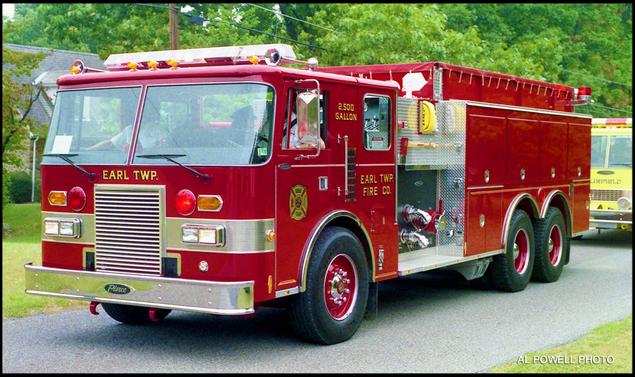 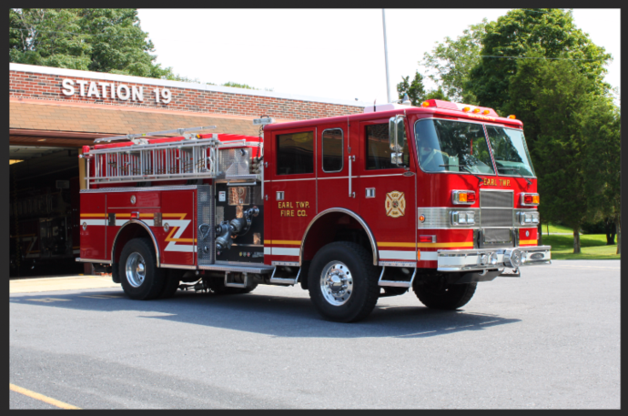 In 1997 the fire company formed a committee to investigate retiring the 1955 Ford and Selling the 1985 Ford/Pierce Pumper.  An order was placed in late 1997 for a 1998 Pierce Dash Engine with a 1500gpm pump and 1000g of water, it was delivered and placed into service in October 98'.  The truck would be used as our first out apparatus for most calls requiring an engine, including structure fires, vehicle accidents, medical assists.  In 2000, the fire company decided to purchase another engine that would be used mainly for structure fires and this truck then became the second out for all fires; but was first due on all vehicle accidents, medical assists and other service calls as needed.

As stated in a post above, in the early 2000's, a 15 year apparatus replacement plan was enacted and we knew to achieve a 5 year gap between new apparatus purchases, this truck would need to be replaced in 2010 to better align future apparatus purchases.   A new Pierce Arrow XT Engine was ordered in December or 2009 and the 1998 Pierce Engine was placed For Sale in February of 2010.  The Philadelphia Steam Fire Engine Company of Pottstown purchased the engine and took delivery of it in mid 2010.  They had the truck painted to match their other apparatus.  As of 2018, the Phillies still own this truck.

The first brand new pumper for Earl Township came from Pierce Manufacturing in Appleton, Wisconsin. The fire company placed an order for a 1985 Commercial Cab Ford-C 1000gpm pumper in 1984 and took delivery on July 17th, 1985.  A housing celebration was held on September 13th, the following year.  The pumper was the fire company's first out pumper for all structure fire until it was replaced by the 1998 Pierce Dash Engine in 1998.  The truck was sold to "Company Two Fire Apparatus" out of Snellville, GA in July of 1998.  It was sold by them to a rural fire company in Georgia sometime in October of 1998.

By 1994 the AMC/Jeep is now over 20 years old, the fire company began investigating options for a newer brush truck to add to the fleet and place the Jeep as a second out piece.  An order was placed in late 1994 for a Chevrolet 3500 Diesel Chassis from Quigley Chevrolet in Bally.  E.M. Kutz and Badger Body by Omaha is contracted to build the body of the Brush Truck and Custom Fiberglass is contracted for a 200 gallon Tank and to install it and a 250gpm pump on a slid in skid-unit.  The Chevy was ready for service by 1996 and used as our first out brush unit until it was replaced by one of our two 2008 Ford brush trucks.

In 2007 the company began investigating replacing both the 1973 AMC/Jeep and the 1995 Chevy.  The Chevy was placed for sale in early 2008 and on June 25th, 2008, the Chevrolet was sold and officially left for its new home just around the corner with the Union Fire Company of Bethel, Berks County.  As of 2018, Union Fire Co. still owns the truck.